Back to About Us
Our history

While the Waste Management NZ Limited brand was created in 1985, our history can be traced back to Auckland in 1894.

This photograph was taken in the 1890s, when New Zealand’s population was estimated to be around 715,000. It captures the beginnings of Bryant Cartage, a fledgling company that began trading out of Auckland in 1894.

Bryant’s business evolved into a diverse range of enterprises, including trading as wood and coal merchants, bulk haulage contractors and general carriers. At the time New Zealand’s total imports were valued at close to £7,000,000.

The men employed by Bryant Cartage used barges and sailing vessels for transportation on coastal waters and inland rivers, and horses and cart (as pictured) on land.

The business grew in size and success, and in 1935 was renamed AW Bryant Limited. It was from here that the company got involved in waste collection and disposal for the first time.

By the early 1970s the company had moved away from its other activities and turned its focus to the waste industry as its dominant activity. 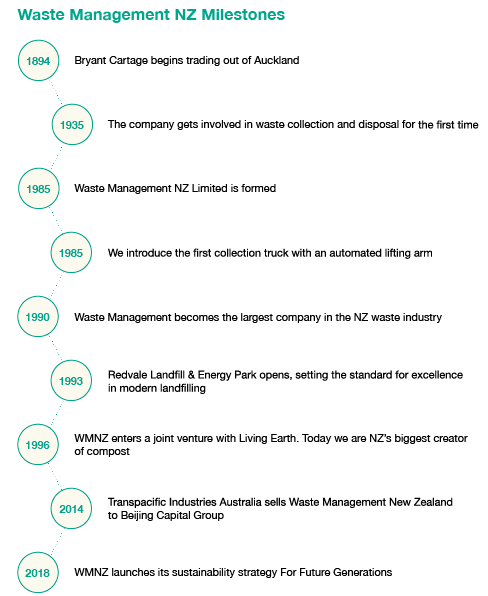