Disposing of waste diesel from the remote Brothers Islands

An aerial view of the islands and the lighthouse

Flying across Cook Strait to the remote Brothers Islands via helicopter to service a lighthouse. Work stories don’t get much better!

Leonie and Brendon with the lighthouse in the background.

The Brothers Islands are a group of small and extremely isolated islands in the Cook Strait. One of the larger islands is home to a lighthouse, built in 1877 and famous for being the last manned lighthouse in Aotearoa – right up until 1990 when it was automated. The Brothers Island Lighthouse was notorious for sending lighthouse keepers “rock happy” because of the isolation and was deemed unsuitable for women and children because of the hazardous landing and confined living conditions!

The lighthouse was powered by diesel for a period before being converted to solar, and in early 2021 Maritime NZ contacted Technical Services to provide a solution for the transfer and disposal of waste diesel from a tank on the island.

Managing the risk of contaminating the surrounding environment was important, as the island is a DOC wildlife sanctuary and home to tuatara and other rare species.

It was agreed that an intermediate bulk container (IBC) should be transported to the island via helicopter, and the diesel could be transferred using a diaphragm pump powered by a portable air compressor.

Leonie and Brendon accompanied the IBC, flying in on a brutally cold winter’s day. The wind made it a team effort to get the slung IBC in the right place for landing. 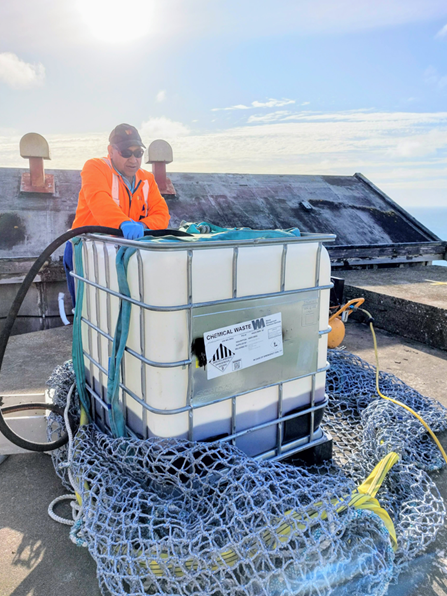 Multiple unexpected problems arose due to the state of the tank and associated piping, but with perseverance, innovative thinking, and some assistance from the rest of the team there, Leonie and Brendon completed the job successfully.

Great job team and an epic experience to remember!